Barging my way across the Brooklyn Bridge was the first and only time I have ever suffered from bell-blister. 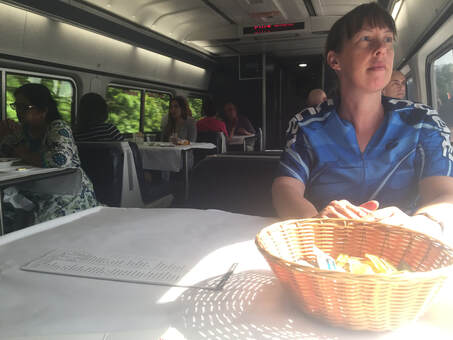 Peddling the Dirt across North America
​
Consciousness found me sprawled out amidst Baltic pine and hazy, filtered sunlight. I woke to the shriek of a bloodied woman hysterically shouting, “my God, my God, what have I done to him?” Indeed this incompetent wannabe cyclist had succeeded not only in busting my collarbone, but also in careering my bicycle along a not altogether unexpected, but different, road.

My Lithuanian doctor was happily corrupt and after threatening multiple times to operate, he opportunistically slapped on me an elbow-to-elbow butterfly plaster. The expectation was that I would bribe him to get something more comfortable. I didn't bribe, but I did suffer. My arms were fixed, strutting full-length slightly in front of me. I couldn't roll over at night and even in my far-sightedness, I couldn't read. I tried watching Eurosport, CNN and listening to the radio, but quickly tired. I soon discovered that if I placed my computer about 50 cm to my right and cocked my head on an angle, that with a little difficulty I could make my MacBook do what I wanted it to do. It was here where the dream was cast.

In my boredom, with the help of the Ride With GPS map-creating platform and America's Adventure Cycling Association, I mapped road by road, street by street, path by path a cycling route from the west coast of the USA 8000km clear across the continent to Canada's east coast. It was my dream to ride it and my expectation it would never happen.

But happen it did. Our work in Europe came to a natural conclusion and we found ourselves with a block of free time and two tickets for two people and two bicycles to sail from Southampton to Brooklyn, USA.

We had tour-cycled before, in fact we had become quite slick in the art of living off a leather saddle, but we had only toured in Europe and were not quite prepared for the brashness of polarised Donald and anti-Donald Trumpians. We didn't visit to make America great again or to make Canada polite: we came to smell her morning mist, see her sun rise, endure the coffee and experience her people. We came for small towns, quiet roads and empty landscapes. We sailed into New York City.

In Europe, bicycles have a wonderful piece of high technology called the bell. It is a contraption designed for collective community-orientated cultures to effortlessly tinkle their way through seemingly unnavigable communal spaces. In America, the circular metre around you is your space and no one shall enter, regardless of a frantic dinging bell, screaming Kiwi or 50 kg of Hungarian bicycle hurtling towards him or her.

Day 1 in the USA barging my way across the Brooklyn Bridge was the first and only time I have ever suffered from bell-blister. It was also the closest my wife has ever been to being run down whilst on her bike. It seems Big Apple taxi drivers only give way when you don't and if you hesitate then you are roadkill. Sharon hesitated, the cab didn't - the result could have been yellow paint down the side of her pannier. The collision was only avoided because Sharon howled with the ferocity of a living tenderised dog, scaring the horrified driver and gaining herself a police escort to the other side of the road. It could only get better from here.

We chucked our bikes on Amtrak and caught the train to Oregon. On arrival in Portland, we pushed my bike to a bike shop to repair the damage Amtrak had created. One hundred and sixty US dollars worth of mechanical wizardry and a few days later, we were eating oysters and drinking craft beer with dear friends on the eve of our 5000 mile transcontinental adventure.

And that is how it began, from a seaside broken clavicle to SPD clips at the Pacific mouth of the Columbia River.